OptoDiscs special thermal printable coating and enhanced packaging prevents thermal discs from sticking together so they donâ€™t stop your production.

When operating a thermal printer publishing system, an automated system that copies and thermal prints onto discs, the key is that it can function independently until the job is completed. Even though the hardware is functioning properly, if the media used in the system is sticky, it could kill the entire job, not to mention the potential damage it could do to the drives and the print head because multiple discs stuck together were loaded into the device.

Due to the nature of the thermal printable coating, which is designed to withstand thermal transfer ribbons that is heated and adhered to the disc, the top coating can become sticky due to compression or humidity. When the discs stick together, if the operator doesnâ€™t manually separate them properly, they will cause the system to fail and could become a costly and time consuming headache.

To prevent these issues, OptoDisc developed a special formula for their thermal coating that will allow the discs to have a smoother, less sticky nature, yet still provide an exceptional print quality. Through the proprietary thermal printable surface and the adaptive packaging, the OptoDisc thermal printable media is the best solution to prevent sticky media and make sure your production doesnâ€™t get stuck!

For the most lifelike video imagery, true HDR capability makes all the difference. 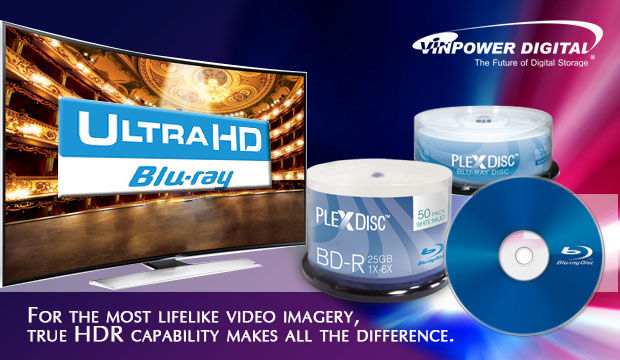 What is HDR (High Dynamic Range) and what makes it important? Weâ€™ve heard about 4K video and TVâ€™s for a few years now, but in reality we havenâ€™t seen the truest form of what 4K has to offer. Thatâ€™s because adding true HDR provides the best UDH 4K performance and creates a better home viewing experience for Blu-ray content as detailed in the below article:

Now that the TV and Blu-ray player manufacturers are updating their TVâ€™s and BD players with HDR, it will lead to new content for the enhanced HDR 4K Ultra Hi-Def (UHD) format. Hollywood studios have mastered around 100 titles in UHD HDR for SVOD and Blu-ray, a number predicted to triple in 2017 by Warner Bros. Worldwide Home Entertainment Distribution president Ronald J. Sanders. â€œThereâ€™s a concerted effort to match the growth and install base at home,â€ he said at the CES. He said Warner Bros. was â€œaggressivelyâ€ going into its catalog to refresh titles with an HDR sheen. That means Hollywood studios see the added HDR as a significant improvement over standard Blu-ray 1080 or even the current 4K quality, meaning thereâ€™s an opportunity to sell even more content. When thereâ€™s money to be made, they are open to investing in converting content from their catalog for this the UHD HDR, meaning they believe there is enough difference and advantage for the consumer to purchase a title again or for the first time because of the added brilliance in picture quality and sound.

That means if you are currently working in video content and deciding whether to start producing Blu-ray content for your clients, this is the perfect time to move into this arena. All aspects of the hardware have lined up so that the consumers will be ready to Segway into the UDH HDR atmosphere and they will be hungry for content. â€œGrowth of the 4K UHD market continues to dwarf the transition to high-definition television,â€ according to Steve Koenig, Sr. Director of market research. â€œJust 3 years since introduction, cumulative sales of 4K UHD displays are forecast to hit 15.6 million units, while sales of HDTVs reached 4.2 million units in their first 3 years on the market.â€

2017 will see a great deal more HDR activity as the addressable base of 4K UHD TVâ€™s with HDR widens. In North America, the penetration of HDR TVs will be between 10 percent and 14 percent at year-end, Futuresource predicts. So donâ€™t miss this opportunity! 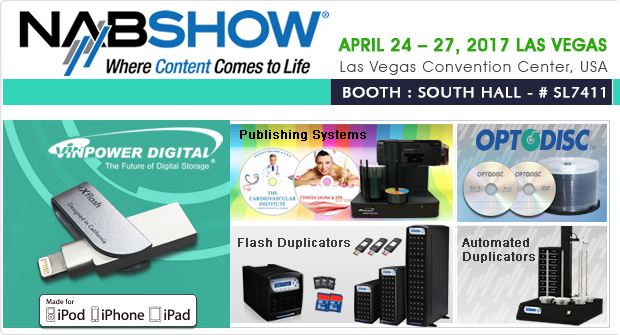 Hereâ€™s another opportunity to see both the incredible hardware and advances Vinpower Digital has in store for 2017 and beyond. If you havenâ€™t already done so, you can register now for a Free Exhibits Pass, Use Code NE26. This is the perfect time to make an appointment and meet with a Vinpower representative to learn about the exciting new products and features Vinpower has and will soon launch. Vinpower has made new strides in their USB and SD duplicators, automated duplicators and publishing systems, and our latest breakthrough the new Secure Flash media line. Those and more will be on display during the NAB tradeshow taking place at the Las Vegas Convention Center from Monday, April 24th through Thursday, April 27th. Even if you visited with us at CES this past January, youâ€™ll still want to visit our booth at NAB as weâ€™ve made even more strides in those months that you are certain to learn about products and opportunities that were not on display or discussed at CES.

Hereâ€™s a link to register for the FREE NAB exhibit pass: https://registration.experientevent.com/showNAB171/?Passcode=NE26

For more details about scheduling an appointment or any of Vinpower Digital’s range of hardware, software, and media offerings, visit our website, www.vinpowerdigital.com or speak with an authorized Vinpower representative near you.

Avoid creating bad copies because the USB master was corrupted and you didnâ€™t know it! 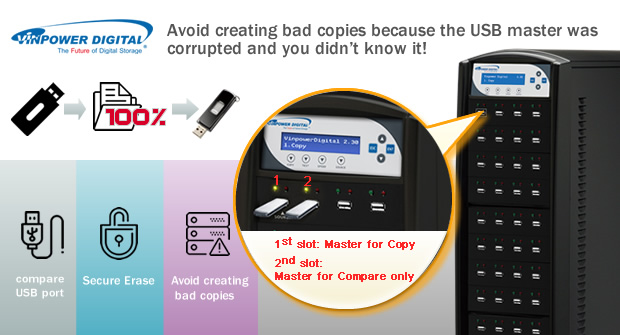 Flash media doesnâ€™t use a unified standard like optical discs, so each USB flash drive you get could have slight or significant variations, even when you purchase the same brand. Because flash is meant to be copied over and over again across a number of memory chips, itâ€™s not uncommon for some of the memory to become corrupted during the copy process. What that means is that if you are copying a master USB flash drive to multiple USB flash drives, the master USB flash drive is constantly be read over and over again to make the copies, which has the potential of some of the memory to be altered. That means that if the master is altered, even slightly, it could negatively impact all the copies youâ€™re making. Most experienced duplicators will use the copy and compare function in order to ensure the copies match the master, which should ensure perfect copies. However, if the master is altered during the duplication process and becomes corrupted, then the copies will match that corruption and therefore pass the compare process. This could lead to the operator believing they made all successful copies but in reality they potentially created a sizeable number of bad drives that they could send out to potential customers.

Vinpower created an excellent method to prevent this catastrophy from happening by dedicating a separate USB port as a compare only port. By having a dedicated compare only port, youâ€™ll insert 2 identical master USB flash drives into the source port and the compare only port and then when you make copies and run the compare feature, the source port drive will send the duplicated content to all the waiting USB flash drives and then those copied drives will be compared to the separate compare only drive. That way, if thereâ€™s any variation between the two masters it will be picked up immediately and those copied USB flash drives will be failed to prevent the user from using the corrupted drives before they are accidentally given to the customers. This dual copy and compare process does not take any extra time but gives the operator complete piece of mind that the copies they made are 100% authentic identical copies of the original intended master content.

So if you want total piece of mind and assurance that your USB flash duplicated drives contain the content you intended, then you need a Vinpower USB duplicator that offers the dual copy and compare ports.