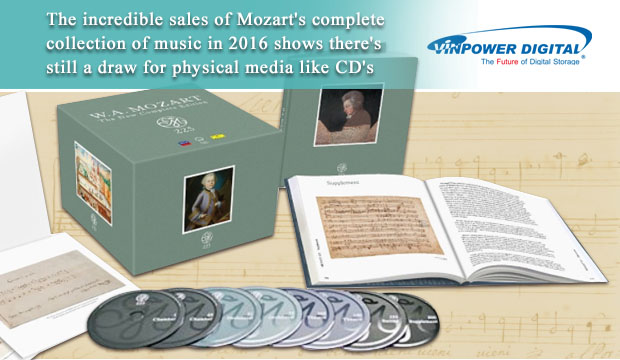 The best-selling CD of 2016 was from an artist who hasnâ€™t played/composed a note in over 300 years. Wolfgang Amadeus Mozart is one of the most popular artists to have ever lived. In 2016, â€œMozart 225: The New Complete Editionâ€ was released as a 200-CD box set, featuring every known piece of music ever written by the iconic composer. According to Billboard, unit sales have surpassed 1.25 million. Even though the sales are slightly skewed since Billboard counts each individual disc separately, the total CD sales volume is still incredibly impressive. Mozartâ€™s endurance in the musical arena has once again proven just how beloved he remains amongst both music aficionados and casual music fans, but shows us an even bigger perspective.

What this tells me is that not only are physical optical disc media like CDâ€™s still very relevant today, even in a declined state, but the more creative you are at creating packaging and offering content, the more valuable that media would be the marketplace. The key isnâ€™t that 1 million people purchased a Mozart CD, because thatâ€™s not reality. Itâ€™s that over 6,000 people shelled out a significant amount of money to purchase a box set of 200 CDâ€™s, which was equivalent to 1 million sales if not greater due to the value add price tag on such a box set.

This is a very encouraging sign to duplication houses and independent studios in that the more of a novelty you can make your product, the more likely to be able to sell it at a premium price. People still like conversation pieces and novelty items, so with some creativity, targeted marketing, and the right equipment and media, anyone can produce content that can be a juggernaut in the retail arena. Along with that, once again, this proves that CDâ€™s are not dead and neither are the people that buy them, even if the artist on the CD is.

For more details about Vinpower and our expansive product line, please visit our website at www.vinpowerdigital.com, or contact a Vinpower representative at a location near you.

Copy Protection isn’t just for the major studios, but for anyone that has content they donâ€™t want others to copy. 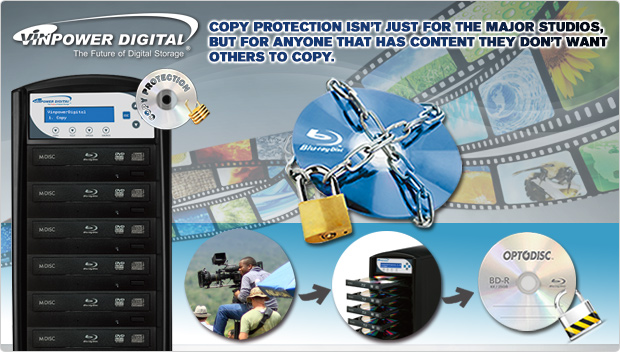 Picture for a moment that you have digital video content that you want to sell or share with others, what are your limitations? One issue could be that those that view your content, decide to make copies or upload online without your permission or consent. If you were hoping to sell that content, then you no longer have the opportunity because someone took that decision from you and made it available for free to anyone. If you had hoped to keep the content private, now its been released into the web or passed from person to person for all to share and see without your ability to selectively decide who can view the content and who canâ€™t. Protecting content is not just a large enterprise or movie studio problem, it can be an everybody problem.

Vinpower has been developing hardware and software tools that enable companies and individuals to keep their content safe for many years now and we continue to improve the process and decrease the costs to do so. It shouldnâ€™t cost you an arm and a leg just to protect whatâ€™s rightfully yours. So donâ€™t take any changes with your digital video content, add Vinpowerâ€™s copy protection to rest easier that you donâ€™t have to be a victim.

For an added bonus, stay tuned to next weekâ€™s email blast for news on an upcoming offering from Vinpower Digital that will be a stretch from our usual offering.

For more details on Copy Protection or any of the Vinpower Digital product line, please visit our website, www.vinpowerdigital.com, or contact a Vinpower representative near you.

WARNING! With the flash memory shortage, costs are inflated, leading to a flood of counterfeit and low quality USB & SD Flash media hitting the market! 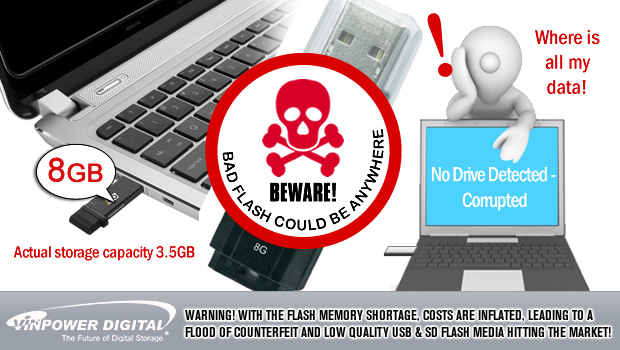 As the flash market is concentrating on the creation and subsequent market shift from the 2D/Planar to 3D NAND technology, itâ€™s creating a shortage in supply for good quality flash memory in the storage market. This situation has a huge impact on the SSD market, but also touches on the standard USB and SD flash drives as well. Because of this, the oldest adage of economic principle of supply equals demand, has shifted to a greater demand that most suppliers can provide. Because of this, there are a lot of lower tier and unscrupulous manufactures trying to fill the underserved marketing place with lower priced high capacity USB and SD flash drives. The problem is that many of these manufacturers either canâ€™t or purposely donâ€™t use adequate memory to provide a fully functional product. The market is flooded with low cost flash drives that state they have a specific capacity only to discover that not only does the flash drive not have that capacity, but the memory it does have is low grade and can be corrupted easily, thereby crashing and losing all the data contained inside.

Vinpower has been aware of this situation for quite some time and weâ€™ve worked tirelessly to help our customer overcome these issues so that they can use our USB and SD duplicators to produce effective and reliable copies of even the lower grade flash devices. At the same time, Vinpower has developed tools to help weed out the bad flash drives from the good ones, so that manufactures and wholesalers will be able to identify which flash drives are good and which are bad with confidence. The fact that Vinpower offers flash duplication hardware, gives us a unique perspective and capability to identify and weed out the negative from the positive flash drives. This helps avoid the potential nasty situation where a customer purchases a high capacity flash drive, like the popular 8GB version, then they find thereâ€™s only 3GB worth of memory on the drive and because of the extraneous circumstances the drive crashes and you lose everything stored on it.

Iâ€™m not saying that every low cost flash drive manufacturer is bad quality, but itâ€™s more likely than not and itâ€™s only going to get worst as long as the demand is high and production is lower for the larger more reputable companies.

For more details about Vinpower and our expansive product line, please visit our website at www.vinpowerdigital.com, or contact a Vinpower representative at a location near you.