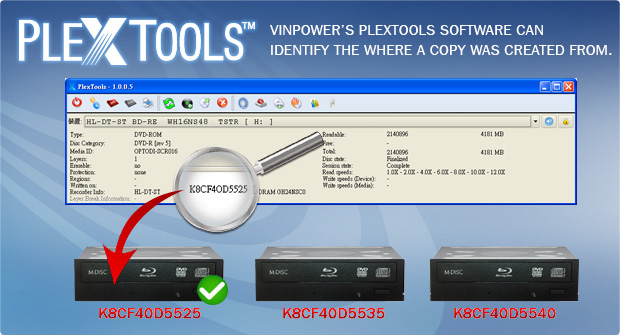 Vinpowerâ€™s version of Plextools, offers the improved functionality of being able to trace back the origin of which drive created that specific copy. Through the Plextools software, one could load a previously burned recordable disc and the software can identify the make, model, and internal serial number of the drive that burned that specific disc.

The application has numerous applications, but two of the key benefits are related to:
1. Identifying a bad drive: If customers are complaining that they are not able to view a project provided to them on a burned disc, often times that the result of a drive that is partially failing. If may pass the disc as successfully burned, but there could be glitches or burn marks that make it difficult for playback. By using Vinpowerâ€™s Plextools, you can identify which drive(s) those discs were burned from and replace the drive(s) to avoid making additional defective copies.

2. Tracing the source of unauthorized copies: If you have a project that is sensitive or was not authorized for others to make copies of, Vinpowerâ€™s Plextools can identify the exact internal serial number(s) of the drive(s) that created those discs and enable you to better determine who made the unauthorized copies based on who owns the drive(s) that burned those discs. Just like fingerprints, thereâ€™s no way to erase the identifying marks, even if the external serial number is removed, the internal serial number cannot be altered or destroyed. Even if the discs do not contain watermarks, Plextools can determine what burned that disc to help you determine who the culprit is.

This is just one beneficial feature provided through Vinpowerâ€™s Plextools, if youâ€™d like more information about it or where you can get it, visit Vinpowerâ€™s website at www.vinpowerdigital.com or contact a Vinpower sales representative near you.