With the 4k UHD Blu-ray Specs Released, itâ€™s only a matter of time before they will be commercially available. 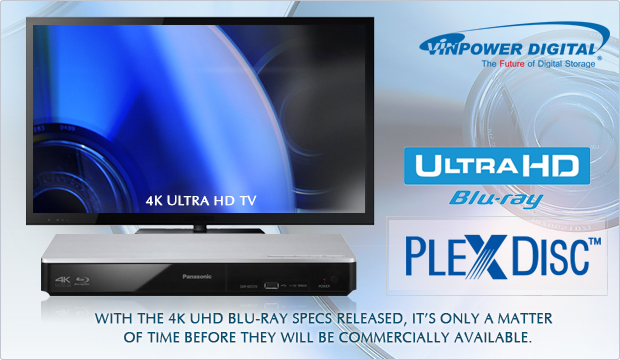 The Blu-ray Disc Association has recently released the specifications for the Ultra High Definition (UHD) specifications, clearing the way for optical disc manufacturers to begin producing the new format. This is a critical step as 4K TVâ€™s and content have been produced for quite some time now, but there hasnâ€™t been an approved specification for the production of a 4K or UHD optical disc until now. The significance is twofold:
â€¢ There hasnâ€™t been a new disc format since the original Blu-ray was introduced and subsequently won the HD format war from HD DVD in 2006.
â€¢ Now 4K TVâ€™s finally will have a player and content that can be played in the comfort of oneâ€™s home.
Itâ€™s no small feat to adopt a new format specification. Firstly, it takes multiple engineering teams across multiple industries to develop and sustain the new technology, which can be made readily available for the general audience. Secondly, it takes a consortium of major corporations to agree and to iron out who holds patent rights for this new format. Surely Hollywood studios along with TV and Blu-ray player manufacturers are excited about the opportunity for a new format, which will create a new market for 4K content and devices to play it on.

Vinpower is also excited about the new format and that the media specifications have been finalized. This will allow us to support our growing market with 4k/UHD duplication hardware and media that will meet all industry standards in the very near future. Since Vinpower works diligently to stay ahead of its competitors in being able to offer new ODD duplication technology first, you can rest assured that Vinpower will pay close attention to when media manufacturers go into production using the newly approved UHD specs, making the discs available through our network of dealers and resellers.

For more details on all of Vinpowerâ€™s digital duplication hardware, media, and printers, visit our website or speak with a Vinpower representative today.