Vinpower’s TITAN Supreme Blu-ray Autoloader can provide the quality, output and reliability of a full-scale Blu-ray replication line without the massive costs. 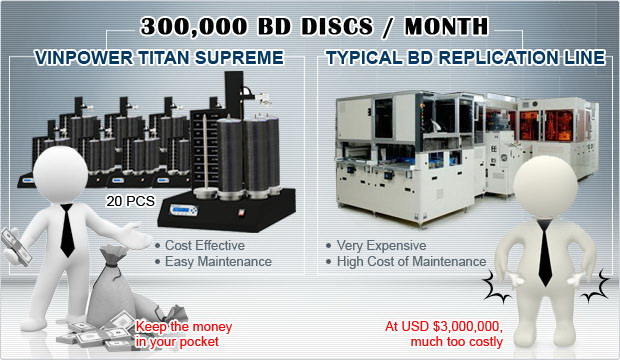 As the demand for high definition programing increases, more production houses are turning to Blu-ray for HD video content. While Blu-ray volume is increasing, the number of facilities able to provide Blu-ray reproduction is not growing at a relative rate due to the staggering costs associated with purchasing and maintaining a new line.

Vinpowerâ€™s TITAN Supreme has been well tested in the duplication production houses and has a tremendous reputation for quick, easy and reliable automated duplication. Considering a BD replication line can produce a max of 300,000 BD discs per month, it is not hard to equip a duplication house with a number of TITAN Supremes that can match that same volume and at a cost of pennies on the dollar in comparison. For example, if an 8 drive Blu-ray TITAN Supreme can produce 1 round of duplicated discs (8 per round) every 20 minutes, then a single system can produce nearly 600 BD discs per day and over 17k per month. So one can see how easily it would be to run a reasonable number of Supremes concurrently to produce the same volume of BD discs, if not more, than through replication, which could cost millions to purchase and maintain.

The choice is clear, you can pay millions and bring in new Blu-ray replication equipment or pay a few thousands and have a ready to go, out of the box, production facility on hand almost instantly.