Debunking the Myth of the Native SATA Superiority! 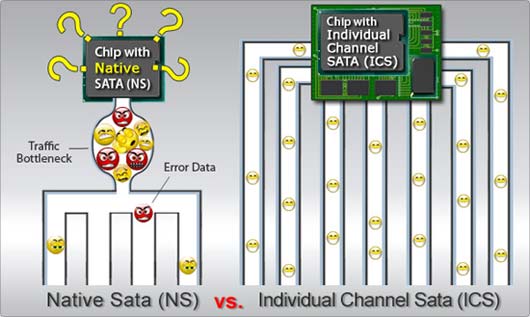 Recently there has been some documentation related to the design method of SATA standalone duplication controllers which touts one method as being better than another. Itâ€™s important that the truth be told and I want to set the record straight so that the consumer can review the facts and decide for themselves.

The dispute centers around the method in which current SATA controllers are designed and built. One party claims to be the sole provider of the â€œNative SATAâ€ (NS) chipset which they claim is faster and more reliable. The alternative application is the Individual Channel SATA (ICS) configuration.

In order to make the comparison in a more understandable concept for the masses, including myself, I will break down the differences between the two by using an analogy that is closely related and something most people can relate to, internet access.

Picture the NS concept as being akin to cable while ICS would be ADSL. In both cases, they will allow the user to access the internet, theyâ€™re both potentially really fast, both offer connections for virtually any computer, and if they exist in a territory are relatively easy to receive.

The cable access does have an advantage in that it can carry greater bandwidth and may be faster than ADSL. According to published websites ranking the downloading speed between Cable and ADSL, theyâ€™ve listed the following speeds:

Cable fluctuated between 15Mbps ~ 25Mbps of download speed depending on the carrier.

The problem comes into play when multiple locations (households) all need to access the single cable line at the same time. Even though cable can handle a higher bandwidth, itâ€™s limited in the number of households that can access the internet at the same time. The reason being is that they are all using the same access point which will bog down the system and cause the speed to drop significantly, especially if they are viewing/transferring large files. Think about it in terms of a sandwich, if you have the option of eating an entire 12â€ sandwich which you have to share with 2 others or you can each a 6â€ sandwich that you do not have to share. The 12â€ seems longer until everyone else starts taking their share, which more often than not, one household inevitably will take more than their fare share. Yet, even if it were eaten equally amongst all 3 households, they will each end up with a smaller amount of the sandwich (4â€ each) than they would have had if they opted for the 6â€ they didnâ€™t need to share.

ADSL may have limitations in the total bandwidth/speed available, but what is available is typically more than adequate for the tasks at hand for reliable fast internet access. The difference and the benefit comes into play when you understand that ADSL provides each household with their own direct access point to the internet hub which they do not have to share. It then becomes that ADSL is faster because they are not burdened or slowed down by the actions of other households who access the internet at the same time.

This holds true for NS and ICS controllers as well. The NS controller may hold an advantage in bandwidth, but the fact that all ports/connections are tied to a single bus, means that bandwidth gets diminished when each connection is utilized, especially for larger capacity formats like Blu-ray. Take for example; a 1 to 7 NS controller. If only 3 of the 7 ports are being utilized, it may be able to successfully copy a full Blu-ray master at 12x speed. However, if you utilized all 7 ports at the same time, then the added capacity and division of bandwidth will now limit the speed to 6x. Since all ports are tied to a single bus, all drives will be tied together which means any errors affecting 1 drive will ultimately create a drag on the total bandwidth and affect all the drives. So using the NS method and the more ports that are utilized the more the speed will decrease and thus so will the reliability.

For the ICS controller, since each port is connected to its own dedicated bus, the speed and drive reliability is not affected by utilizing more ports because they are all independent of each other. So if a 1 to 7 ICS controller can copy Blu-ray at 12x using only 3 ports, utilizing more ports on that same controller will not have any affect on the duplication speed or reliability. The ICS controller is more effective because all ports are connected to individual dedicated bus points that produce consistent and stable transmissions without relying on a single bus with shared bandwidth.

So even though both methods have their merits, in the end the ICS method is the most credible solution as well as the most widely used tactic for the duplication market. The general requirement of a duplicator customer is to be able to produce numerous copies quickly and the ICS method is the only way to ensure that the customerâ€™s needs are met. So when youâ€™re looking for what type of controller you want in your duplicator, keep in mind that just because a company touts that their Native SATA version is faster or superior, they may not discuss the true capabilities of their product when used at or near stated capacity. Donâ€™t take our word for it â€“ run the tests yourself and weâ€™re certain youâ€™ll come to the same conclusion, a shared bus connection model like the Native SATA controller will more likely create significant speed and throughput issues even for the simplest of duplication jobs.