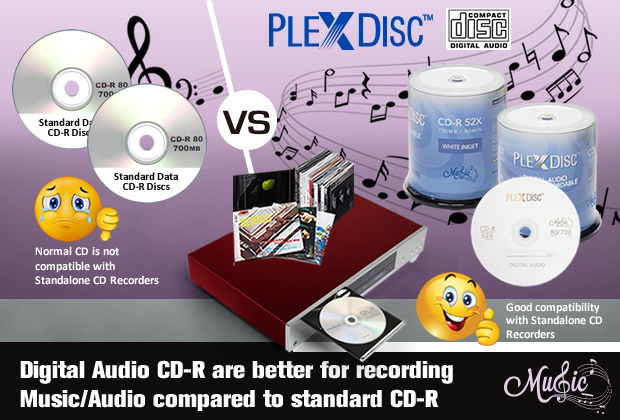 What is Digital Audio CD-R and why should I care? For most people, at this stage in the recordable CD evolution, there’s only one type of CD-R and you can record anything on to it. For the most part, that’s correct, you can use a computer drive to record data, music, video, etc. onto any standard CD-R media. There may be varying degrees of quality between brands, but a CD is a CD.

That’s not actually the case. Although all recordable CD’s can record and play/view any digital content, Digital Audio CD-R’s are specifically made for music/audio content. It doesn’t mean that’s all you can record onto them, but Digital Audio (“DA”) CD-R, also known as Music CD-R, are specially tuned for recording and playback of audio content. In fact, for many standalone CD recorders, they can only use Digital Audio CD-R or the systems will not recognize the media and either won’t record or will fail the disc during the duplication procedure. If you use a standalone recorder for better audio recording resolution, then Digital Audio CD-R’s are often your only option.

Maybe recording CD’s is not a factor because your computer drive can record audio content as well as data. However, there are still a number of players, like car CD players, or any number of CD only players that are very particular about the media they support or have a harder time recognizing standard CD-R, whereas Digital Audio CD-R has better playback compatibility with those players.

If you’re an audiophile or just don’t want to take any chances with recording or playback issues, then I would recommend using Digital Audio CD-R’s or all of your music/audio recordings.