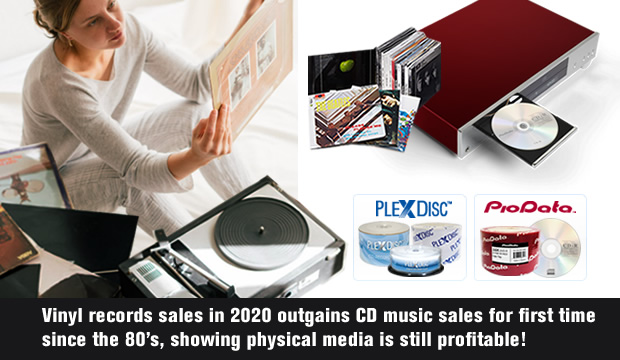 Sure the title seems to cast a negative light over CD sales, but if you examine it closely, you’ll also see the positive opportunity as it relates to CD sales. Firstly, even in a decreased market, CD sales for the 1st half of 2020 was still around $130 million. That’s only talking about pressed CD audio discs, and doesn’t include the CD-R, recorded CD market treasured by many independent artists and enthusiast. Sure, CD’s have fallen from their peak, but they have not gone the way of the Dodo bird.

At one point, it was widely reported that CD’s were going to kill the vinyl albums market. But nostalgia lead to a steep resurgence that created steady gains year over year for vinyl records. The success of vinyl records and the continued increased sales for CD’s, shows that there’s a significant market for physical media. Undoubtedly, it’s won’t be too long before the nostalgia craze comes back around for CD’s and it will be cool to get the authentical full enhanced digital sound of an uncompressed original music file, rather than the deeply compressed streaming audio.

So for all the doomsday predictors that CD’s are dead, just as they thought Vinyl had kicked the bucket, there’s a second wave coming and you don’t want to miss out.