Western Digital announced they will produce a hard drive capable of holding over 40TB of data. 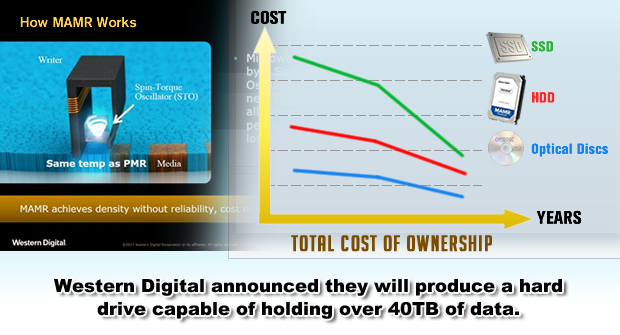 At a recent event, Western Digital announced a recent breakthrough in microwave-assisted magnetic recording (MAMR) technology. Through this incredible technology, WD projects that they will be able to build individual hard drives capable of holding over 40TB of data by 2025. Imagine the capacity of a small server farm contained in a single pocket sized HDD. This would open so many doors for both businesses and individuals alike to maintain and store an enormous amount of data onto a drive that would be portable and adaptable to use with virtually any computer.

Just as many falsely prophesized the death of optical media with the adoption of flash USB and SD, the demise of the standard magnetic HDD due to the propagation of the flash oriented SSD is similarly mistaken. The reason being is the same for both optical discs and HDDâ€™s, in short, the cost per GB of storage. The Total Cost of Ownership (TCO) for both optical discs and HDDâ€™s in much lower and will continue to remain considerably lower than that of flash oriented products. The reason is the cost of production and the volume of production. Both optical discs and magnetic HDDâ€™s can be made cheaper, faster, and in greater quantities than their flash counterparts. So we will not see the demise of either anytime soon.

In saying this, it doesnâ€™t mean the traditional optical disc and HDD will kill the flash market. Flash is still a growing and evolving storage medium in its own right and continues to gain in popularity. So flash is still the future of storage, but it will not fully replace or dominate the market as once foreseen. With the importance in both the professional and consumer market for high capacity storage, I foresee multiple forms of digital storage devices servicing an expanding and evolving marketplace that will have plenty of content to store across all forms of digital ecosystems.