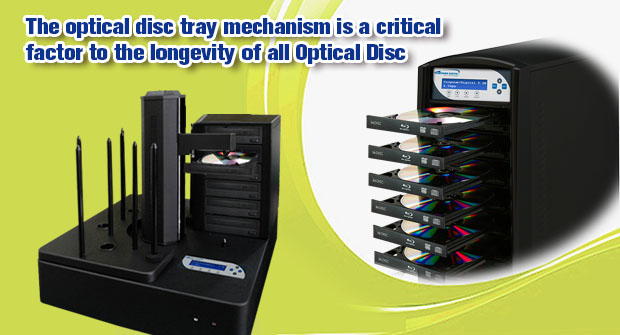 When most people think about the most critical part of an Optical Disc Drive (ODD), they typically think of the lazer diode that reads the discs. Of course that is a critical element and without it the drive cannot function. However, there is another critical element that is often overlooked and not given much consideration, the disc tray mechanism. That includes not just the tray itself, but also the gears, pulleys, and sliding mechanisms that allow it to extend and recoil smoothly and consistently.

Often, because itâ€™s not seen as critical as other components, because production drives are designed for single drive PC use, many manufactures donâ€™t put much thought behind how to enhance it. The problem is that while a typical computer owner with an internal disc recorder drive may open and close the drive infrequently, a duplication equipment user will depend on those drives opening and closing potentially hundreds or even thousands times a day.

So if you are a duplicator or manufacture duplication equipment, be it manual towers or robotic autoloaders, contact Vinpower through our website, www.vinpowerdigital.com, or through a member of our sales and support staff to get more details about which of our many ODDâ€™s would be the right fit for you.